Modern Science of Affects of Consciousness & Vibration on Water 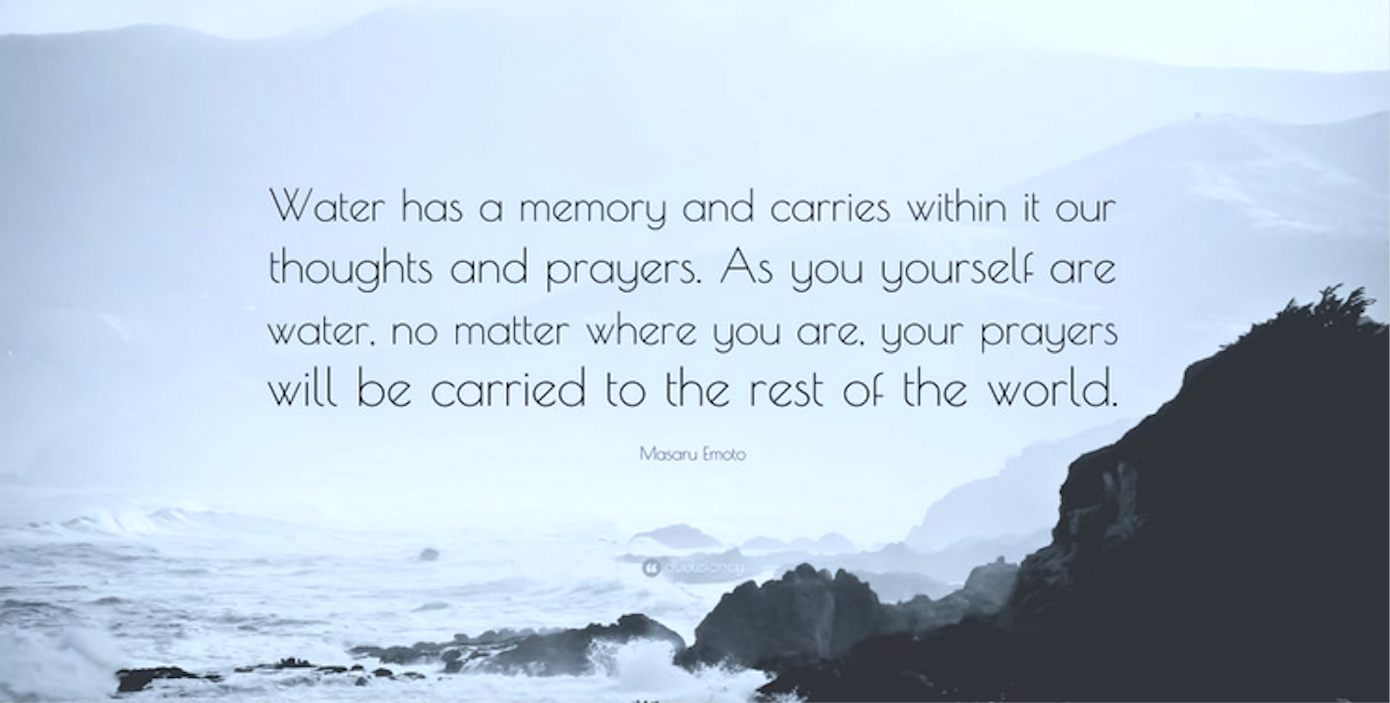 Interview with Dr. Masaru Emoto About the Magic of Water

How Your Consciousness Directly Affects the Universe Dr. Emoto (1 of 8)
(8 part documentary)

Masaru Emoto, most well know for his book, Hidden Messages in Water, believed that the vibrations of human emotions and consciousness effects the molecular structure of water.

He conducted water crystal experiments where he placed water in glasses that were each labeled with a different positive word, such as love, thank you, appreciation, beauty, and negative words like ugly, evil, hate. Dr. Emoto froze the water and then examined the water crystals under a microscope.

Emoto also conducted similar studies looking at the shape of frozen water molecules from from pure mountain streams, polluted water sources, water exposed to heavy metal music and “soft” music, and water before and after receiving the vibrations of prayer.

The results were the same, as his study with positive and negative words. Pure water, exposed to soft music and loving vibrations, all showed beautiful, unique shapes. Water exposed to pollution and “hard” vibrations had distorted, irregular shapes.

Scientists Show That Water Has Memory
by Jess Murray

A new groundbreaking discovery has been made within the most basic of resources. Scientists have just discovered what they have called “The Discovery of The Millennium”, and a huge revelation in human consciousness.

Scientists from Germany now believe that water has a memory, meaning that what once was seen as a simple commodity has now been closely examined to reveal a scientific revelation, uncovering a mind-blowing truth.

By examining individual drops of water at an incredibly high magnification, scientists were able to physically see that each droplet of water has its own individual microscopic pattern, each distinguishable from the next and uniquely beautiful.

A scientific experiment was carried out whereby a group of students were all encouraged to obtain one drop of water from the same body of water, all at the same time. Through close examination of the individual droplets, it was seen that each produced different images.

A second experiment was then carried out where a real flower was placed into a body of water, and after a while a sample droplet of the water was taken out for examination. The resulted produced a mesmerising pattern when hugely magnified, but all of the droplets of this water looked very similar. When the same experiment was done with a different species of flower, the magnified droplet looked completely different, thereby determining that a particular flower is evident in each droplet of water.

Through this discovery which shows that water has a memory, according to scientists, a new perception of water can be formed. The German scientists believe that as water travels it picks up and stores information from all of the places that it has traveled through, which can thereby connect people to a lot of different places and sources of information when they drink this water, depending on the journey that it has been on.

This has even been compared to the human body, of which each is incredibly unique and has an individual DNA unlike any other. Whilst the human body is made up of 70% water, conclusions could be drawn from these new discoveries that human tears can hold a unique memory of an individual being, through the body’s store of water hosting a complete store of information that is linked to individual experience.

Suggesting that everyone is globally connected by the water in the human body which travels through ongoing journeys, whereby information along the way is always stored.

Observe the Effects of Words on Water: Simple Experiments

The Rice Experiment – Demonstrating the Power of Words
by livelymom on January 2, 2012

Dr. Emoto invites people to observe the effects of words on water by conducting their own simple experiment at home. Boil a pot of rice, divide it into two air tight jars and write “I love you” on one jar and “I hate you” on the other. Put the jars on a shelf, preferably in a dark location away from electrical interferences and wait for 20 or 30 days.

Well, I DID this experiment and here are the results: 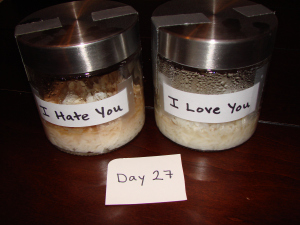 Words can make you sick. Or healed. Heavy or light. Here’s an experiment that might prove it.
by Danielle Laporte

“Let’s talk smack to apples and see what happens.”

And thus began the Good Apple / Bad Apple (approximately) 25 Day (because we lost count) Experiment in our kitchen. I’m a fan of Dr. Masaru Emoto’s research on water and resonance. Apples would prove resonance theory. Sure enough….

Each half of the same apple sat in its own sealed jar on our windowsill. Throughout the day, we’d walk by and say to The Apple of Positivity, You are so awesome! You’re a winner! You are perfect, gorgeous, useful. We love you apple! Apple! You rock! We’d touch the jars, whisper, yell, laugh. Good apple!

As for The Apple of Negativity, well… I had a hard time being nasty to the bad apple, actually. My truly kind-hearted boy had a field day with it, though. Apple! You super suck! You no good, ugly, stinking piece of usefulness fruit. 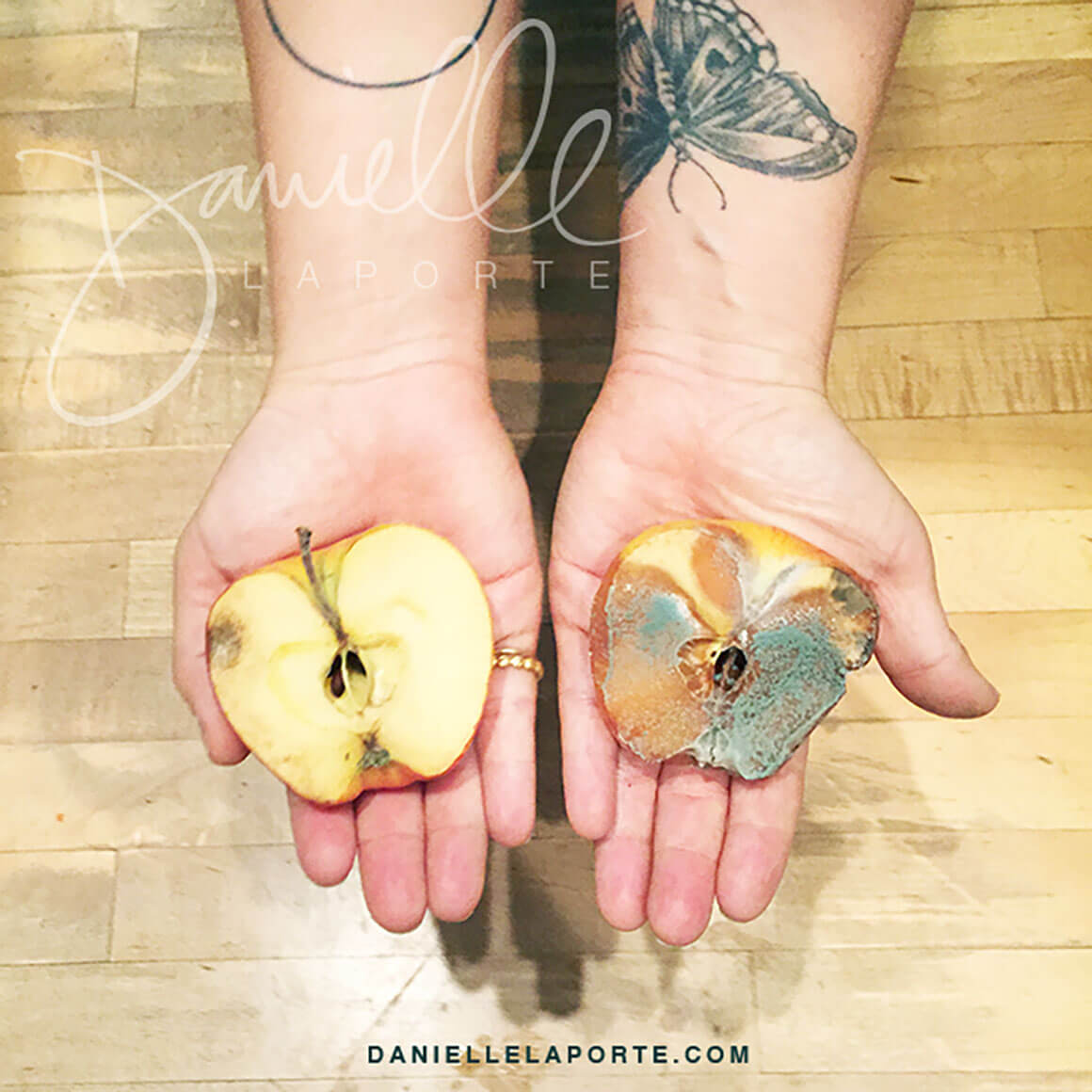 How An Apple Totally Changed My Life
By Jenn Perell

One of my favorite teachers gave me a book years ago. One of those books that kind of blows your mind and also leaves you questioning everything. I was living in Hawaii at the time and paddling canoe—immersed in the water daily. The book is called The Hidden Messages in Water by Masaru Emoto. This book suggests that the molecular structure of water changes depending on the energy around it or words spoken to it. This idea is based on Hado: "The intrinsic vibrational pattern at the atomic level in all matter. The smallest unit of energy. Its basis is the energy of human consciousness.”…

…Flash-forward to just over a year ago, when I read this fun blog by Danielle Laporte where she tested the way words affect our physical and emotional well-being. She referenced Dr. Emoto's work and did an experiment talking to an apple. This was an experiment I could easily do at home (without needing a microscope to look at the molecular structure of something). 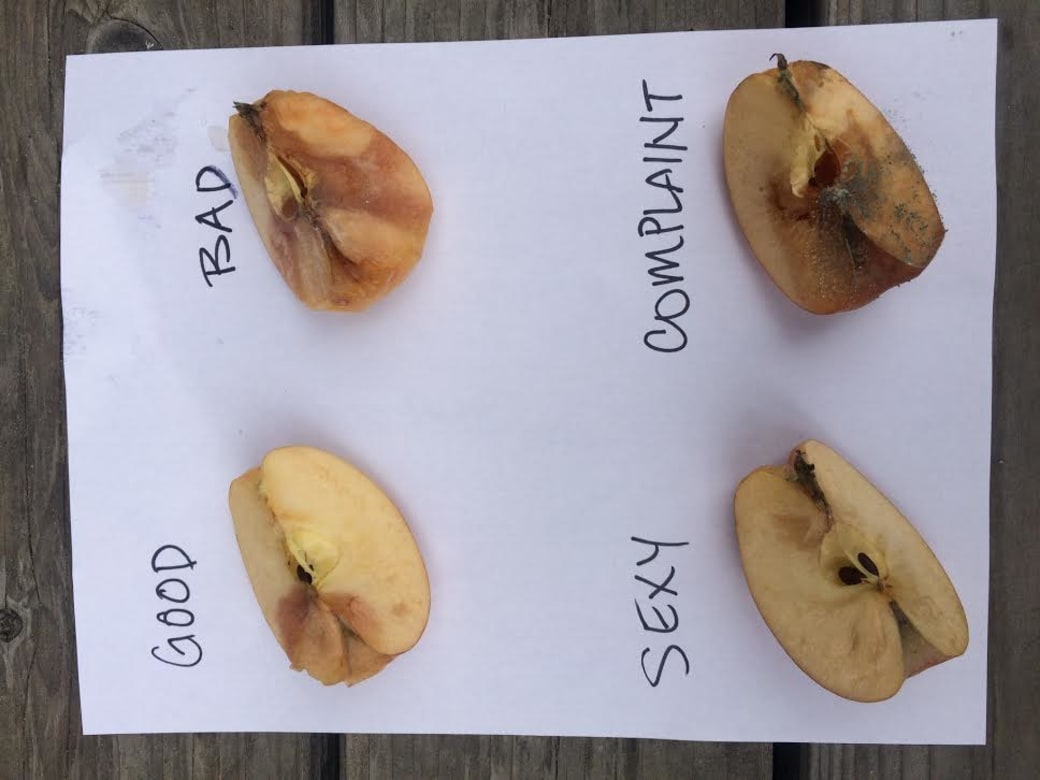 Twice a day for 10 days, we picked up each apple section, walked it across the room so its apple neighbors couldn't hear, and spoke to it according to its label…

…We all have a mechanism in our brains known as mirror neurons, a type of specialized brain cell that transmits impulses related to imitation. Mirror neurons are most active in children and are how we observe, absorb, and copy the behaviors and feelings of those around us. Perhaps it's the same with apples.

Other Examples of How Consciousness & Sound Affect Water